In today’s society we rely heavily on the petrochemical industry, because not only are fossil fuels used to power vehicles and heat homes, but petrochemicals are used to make many of the materials which we rely on, such as the polyurethane foams that are used to insulate buildings.

As the world moves toward greener, more sustainable technology, there’s a greater need for new ways to develop polyurethane. That’s exactly what Dr. Jonathan Curtis and the Lipid Chemistry Group are accomplishing at the University of Alberta. 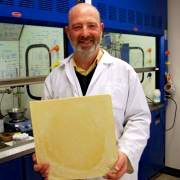 “The objective is to use lipids to make bio-based chemicals and materials,” Dr. Curtis says. “Our first project was to develop a polyol to be used in polyurethane manufacturing. Our idea was to look at really simple chemical processes that could be performed in a very cost effective way.”

The result is what the team calls the LIPROL based series of polyols, which are the bio-based building blocks for a range of different plastics and synthetic materials. After the initial development, the team licensed the technology and the vegetable oil based polyol is now being manufactured on a small industrial scale.

From prototype to commercialization

“We linked up with a coatings company in Vancouver who were really interested in the technology, because they use polyurethane for their coatings – paints and varnishes – and they purchased the license,” Dr. Curtis says.

At a commercial level, Dr. Curtis and his team are still heavily involved with the production of LIPROL based polyols. Dr. Curtis says his team can only accomplish so much in the laboratory, and working with groups using polyurethane on a daily basis helps the Lipid Chemistry Group fine tune the product.

“As we’ve been doing development in this area, we’ve developed new generations of this technology,” Dr. Curtis says. “We’ve actually got three patent applications in on different aspects of polyol technology and making polyol from oils.”

But the work doesn’t stop there, as Dr. Curtis says, since not every community has access to the same renewable feedstocks. The team is constantly looking for new materials to convert into bio-based materials, which Dr. Curtis says could have a direct impact on making greater use of lesser used crops in the agriculture industry.

Keeping it in the community

Dr. Curtis says by finding new ways to use less prominent crops to make polyols and other bio-based chemicals, his team is creating new opportunities for local farmers to expand their business.

“Canola has been our focus because it’s readily available in Alberta, but it’s not necessary to exclusively use canola,” Dr. Curtis says. “We’re also working with camelina, which is a crop several companies are really interested in establishing as a bigger crop.”

Dr. Curtis says the work his team is completing is important to the community as a whole, because his team create new opportunities for farmers by adding value to locally produced oil. He says the work wouldn’t be possible without a team that works efficiently together.

“Having the opportunity to come to the University of Alberta and work with a group that has already started to work on lipid based transformations was a great opportunity for me to move into this area,” Dr. Curtis says. “There’s now so much interest in bio-based materials that this is a great time to be working in this area.”

Not only do bio-based polyols help the environment, but they also provide an excellent economic opportunity.