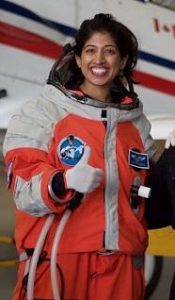 Hang out in zero gravity? Work at NASA? Finish scientist-astronaut candidate training? Perform brain surgery? Pilot a plane? Check, check and check. When we met Shawna in 2009, she had taken a break from medical school to attend the Graduate Studies Program at Singularity University on full scholarship.

You were a Finalist for our 2009 Leaders of Tomorrow Award. Can you tell us about your journey since then?

In 2009, I started my first company, CiviGuard, which is software designed to help emergency responders direct citizens during emergencies. I also briefly trained in neurosurgery, underwent citizen astronaut training and started teaching classes in technology and innovation at the University of Alberta. At the time that I was nominated for the ASTech Award, I took a break between my second and third year of medical school to attend Singularity University in Silicon Valley. This is where CiviGuard was founded. After working with my company, I came back to Alberta and finished medical school. I switched from neurosurgery residency to pursue my interest in space. It’s been a wild ride since 2009.

Where there any specific people or organizations who helped you by providing funding or other support? Did you access government grants or other financial support?

Absolutely. I don’t think that I would have got to where I am today without having support professionally and personally. In the professional sphere, the University of Alberta has been especially supportive.

In regards to institutional support and funding, I’ve traveled quite extensively and I’ve learned that you have to be a bit assertive when looking for funding. I completed my masters at the International Space University on a partial scholarship and my internship at the European Astronaut Centre was also on partial scholarship. The Canadian Space Agency funded my way down to NASA’s Johnson Space Centre. My attendance at Singularity University was paid by full scholarship, so there were tremendous grants and supports in place in order to accomplish all of these things.

Do you think these networks will benefit you in the future?

I think one of the biggest lessons I’ve learned from Silicon Valley is the power of people. I realized how powerful it is to work with someone who has a skillset that is complementary to mine. That’s how we built up CiviGuard. I’ve learned that there is value in everyone you meet.

You have accomplished more than some people do in a lifetime. Where do you go from here?

I’m pursuing my scientist astronaut training with Project PoSSUM. We’re doing further spacesuit testing and later this year, an emergency spacecraft survival course. I’ll be in Puerto Rico in May curating one of the sessions called the LaunchPad. It’s basically like TED Talks for space, so it’s featuring the latest, most innovative developments in space exploration.

Most recently, I’ve been selected as a prime crew member for a project called Project Poseidon. It will be taking place in the summer of 2018 and aims to further ocean exploration, conduct extreme environment science, and break the world record for the longest period of time spent under the sea: 100 days. There’s an underwater habitat off the coast of Florida (run by Florida International University) and we’ll be down there for several weeks at a time.

You are part of the ASTech Alumni speaker’s bureau. Could you tell us a little bit about your presentation topics: Innovation, Technology and the Future of Medicine, and Turning Ideas into Reality? What are the key takeaways from your presentations?

What I like to get people to focus on is shifting their mindset. I want them to learn to question the world around them, and then figure out what their role is as an individual in answering those questions. I’m a frequent speaker on the topics of technology, innovation and the future of medicine. I spoke at TEDx Edmonton in 2010, I’ll be speaking at TEDx at the University of Alberta in March and I was the keynote speaker for the Government of Singapore a few years ago.

Do you have any advice for people starting their careers?

When you’re not sure about what you want to do with your career, always keep an eye out for opportunities. Learn to say yes and look for inspiration and opportunity in all corners. Once you’ve found out what you want to do, learn the value of hard work, focus and discipline. Push yourself to be the best and that will take you very far.