For the next eight weeks we will post a story about from our ASTech Award Winners and Finalists. Students, professionals or anyone looking to become inspired by the people behind the work can check out Humans of Alberta Innovation each Wednesday. 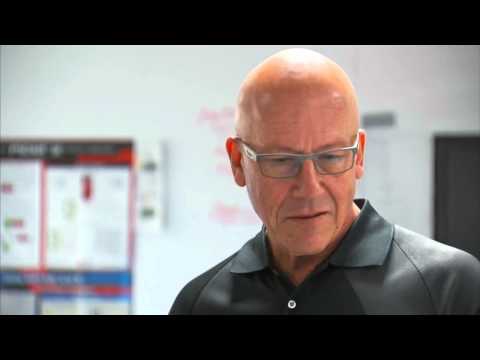 The 2015 Winner of the Innovation in Agriculture Science Award, sponsored by Dow AgroSciences Canada, tells the story of of his childhood fascination with taking apart and rebuilding electronics and how it led to him innovating Radio Frequency Identification in the Alberta cattle industry through his role as SAIT’s RFID research lead.

I’m not afraid to go where there are no footprints.

My glass is always pretty much half full. In my line of work, it’s always like, “Okay, it’s not that I can’t do what you’ve asked me to do, but I just haven’t quite figured out how.” I am always looking for a solution to a problem. I’m not afraid to go where there are no footprints. It’s definitely not a very linear path to success. I’ve always been a pretty good listener, so when someone describes a problem they’re having, I’m not in a rush to tell them, “this is what you have to do.” It’s more of a “here are some of the solutions we should look at.” Sometimes, there literally are no footprints. One of my jobs as a young technical fellow was to drive the snowcat up the mountain in the winter to do repairs at radio sites. Most of the time, you could not actually see where you were going; it was foggy, snowy, maybe a blizzard, but you still had to get there.

From the time I was knee-high to a grasshopper, I’ve always been fascinated by the opportunity of solving problems with technology. I was probably seven or eight years old. My dad was a radio and television repairman in his spare time, so there were always things for us to take apart. There was no shortage of large electronic equipment that he wanted for spare parts, and he said, “I’ll pay you to take them all apart”. I realized as I started taking them all apart that I knew how they went together. Suddenly, it was like, “I could actually build something!” By the time I was eight or nine, I had built an AM radio – which may sound kind of antiquated – and an actual burglar alarm out of spare parts. I scared the daylights out of my mom with the alarm, because it was designed to prevent anybody from coming into my bedroom unannounced, and it just so happened that she was the first.

I also liked anything related to antennas. I climbed up on top of the garage and built an antenna, because my little AM radio didn’t have quite the range that I wanted. My parents gave me that creative license and said, “well, he hasn’t broken too much, he hasn’t hurt any of his brothers or sisters, so let’s just keep letting him play with this stuff.”

I did not grow up on a farm but I lived in small farming communities in southern Manitoba. I have a love for the outdoors, so when the opportunity to work in agriculture came along, something immediately resonated. I am passionate about technology, and through certain opportunities, I’ve gained a passion for Alberta agriculture. Right now, I’m working on tracking animals and locating and identifying them by using drone and RFID technology.

I love being paid to do my hobby. I have a business card from around 1983; it said: “The Innovators.” Innovation for me is a way of life and I’m very passionate about the research.