This week we introduce Chris Micetich, president and CEO of Fedora Pharmaceuticals Inc., which is the 2015 Outstanding Commercial Achievement in Alberta Science and Technology Award Winner. The small remote pharmaceutical team leveraged success into a $750m sale for life-saving drugs.

All along the way, we had way more nay-sayers than yea-sayers 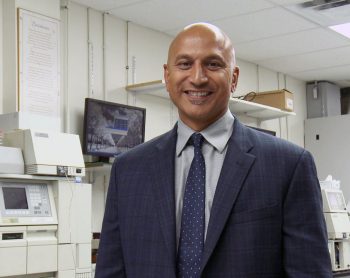 When I was a kid, I knew my father was a scientist but that was all I knew about his career. When I got to university, working in my father’s lab as a summer job, I started to understand more of what he was doing. It wasn’t until I joined him to create a new company and work alongside him that I truly understood the magnitude of his work.

My father invented a drug called Tazobactam, which is a beta lactamase inhibitor. It combines with an antibiotic to make that antibiotic more effective. He suffered a stroke in 2005 in Los Angeles and while in a coma in the hospital, he developed a lung infection. Under normal circumstances, this would kill any patient it effected. With my family all present, the nurse told us not to worry because they had this miracle drug called Tazobactam. I told the nurse that my father invented that drug. She didn’t believe me. But after confirming it, she posted articles about him everywhere. They called him Dr. Taz for the remainder of his time there.

I am passionate about a lot of things, including creating new drugs that will save lives. I also enjoy mentoring entrepreneurs to help take their business to the next level. I never really had an opportunity to pursue that passion until recently. My first year of university was in Science specializing in chemistry. It’s ironic that I really didn’t enjoy chemistry, but I’ve been running a chemistry-based company for 30 years! I joined my father in 1987 to help him start up a pharmaceutical company and I haven’t looked back since. Since that time, I’ve founded six different companies including the most recent, Fedora Pharmaceuticals.

In 2010, when we were looking for a new discovery program to chase, I had my team focus on a new beta lactamase inhibitor that would potentially one day replace my father’s drug. We came up with something found to be much better than Tazobactam. I spun the project into a new company, raised money, advanced the drug into the clinic and then signed the largest licensing deal in Canadian biomedical history to Hoffman-La Roche. Phase 2 clinical trials are underway and all is looking promising. We hope to see our drug on the market in due course.

It was very rewarding for our team that was involved in that deal, particularly since some were also involved in the discovery of Tazobactam. Discovering a drug and going right through development to market and then save lives is incredible!  We take great pride in that and there’s not much more you can ask for in this industry.

Taking an early stage program that originated in my head, convincing a research team to buy into the vision and then convincing people to invest was not easy. All along the way, we had way more nay-sayers than yea-sayers. It was a very difficult but rewarding experience to convince people to buy in to what we were trying to accomplish and then actually deliver. I hope before I retire to discover and license another life-saving drug for a big pharmaceutical company to take to market.