This week we introduce Jessica Luc. A Finalist for the 2016 Leaders of Tomorrow award, Jessica divides her time between medical studies, non-profit organizations she founded and entrepreneurial pursuits. Find out what’s keeping her from pursuing a career as an astronaut. 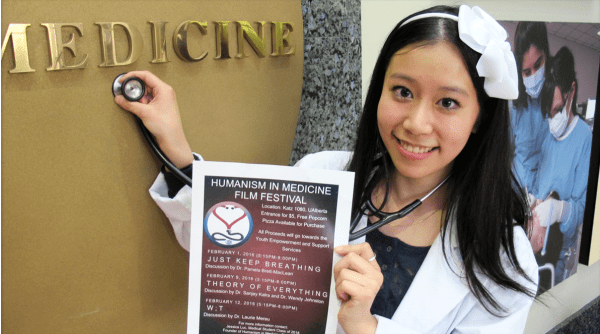 My path to medicine was not a straight one. I was a really ambitious kid and for me there was no limit – I actually first wanted to be an astronaut so I could venture outside Earth and make discoveries to benefit the human race. However, after travelling to Disney World and going to the Experimental Prototype Community of Tomorrow where I tried the astronaut simulation, I knew deep down that I was not built for G-force swirls and turns. Motion sickness settled in along with a twist in my career goal.

I have always been a curious person and believe that one new idea — or new twist on an old idea — could launch us to the next level. Creativity and fear cannot co-exist, so I compete only with myself with the objective of being better today than I was yesterday.

Because I am passionate about science and the arts, pursuing a medical career means I can tackle humanity’s greatest challenges and hopefully affect social change. The research I am doing is focused on ex vivo organ perfusion and its potential to preserve, resuscitate and repair damaged donor organs for transplantation. I spend hours and hours in the research lab and I fail nine times out of ten. But I believe that all these failures have taught me that you cannot fail unless you quit. I believe that we “try again, fail again, fail better” as Samuel Beckett said, and setbacks are simply set-ups for comebacks and opportunities to learn and grow.

I have been a victim of bullying and having a good friend with eating disorders, so I co-founded a non-profit organization called Be Your Own Kind of Beautiful. Our motto is “Be (You) tiful”. Our goal is to raise awareness about eating disorders and bullying while we deconstruct society’s perceptions of beauty. We aren’t victims of circumstance, but rather our inner world determines our outer world. We ultimately have the power to create our own opportunities and happiness. I hope that I am able to make circumstances better for those who come after me. I also teach piano and mentor other budding individuals interested in medicine.

Despite likely never overcoming my motion sickness to make it to space, I continue to enjoy opportunities to effect change in the space industry. Working with a multidisciplinary team, I am part of the AlbertaSat initiative at the University of Alberta. We built a nanosatellite that was launched into space by NASA to conduct research experiments. I am also passionate about 3D printing and I am part of a medical makers’ community to produce 3D printable medical supplies for affordable healthcare in remote communities. The fact is the discovery of a truth in an unrelated subject could easily be transferred to a current problem, as there is a certain level of relativity and relationship to the order of things.

I believe that everyone should reach for the stars while keeping their feet on the ground. None of my accomplishments would have been possible without my parents, supporters and mentors who believed in me and gave me a chance to fly.